As a ‘senior citizen’ man battling to stay alive with IPF I found this story moving and inspiring – it concerns a singer – Chloe Temtchine who is facing PVOD.

In February of 2013, singer was completing her album, No Pressure — produced by Grammy nominee, Greg Camp — and preparing the international promotional tour. Then one day she was rushed to the emergency room with congestive heart failure that left her unable to breathe, and barely alive. She was later diagnosed with PVOD, a rare and often fatal pulmonary disease.

The 30-year-old New Yorker was given a slim chance of recovery. But this past Thursday night at Chelsea Piers, Chloe Temtchine was back onstage, a portable oxygen tent by her side and a thin breathing tube in her nose. She amazed hundreds of people with her vibrant voice and soulful songs, performing three numbers that led to a standing ovation.

PVOD is at least as deadly as IPF a median prognosis of around 2 years, 3 years in the case of IPF.

Both PVOD and IPF are designated as rare diseases.

You will get an idea of the complexity of this area of 200+ diseases from this site – http://www.pulmonaryfibrosis.org/life-with-pf/about-pf

I have clipped a few sections.

See particularly the diagram below;

WHAT IS PULMONARY FIBROSIS?

The word “pulmonary” means “lung” and the word “fibrosis” means scar tissue – similar to scars that you may have on your skin from an old injury or surgery. So, in its simplest sense, pulmonary fibrosis (PF) means scarring in the lungs. But, pulmonary fibrosis is more serious than just having a scar in your lung. In PF, the scar tissue builds up in the walls of the air sacs of the lungs, and eventually the scar tissue makes it hard for oxygen to get into your blood. Low oxygen levels (and the stiff scar tissue itself) can cause you to feel short of breath, particularly when walking and exercising.

Approximately 10-15% of those with an “idiopathic” form of PF have another family member afflicted by the disease. This is called familial pulmonary fibrosis (FPF)

. A number of genes and genetic variants have been identified that are associated with the development pulmonary fibrosis, but frequently genetic tests are not performed when PF is diagnosed, as we are only just beginning to understand the significance of these genetic abnormalities. It is important to discuss the potential risks and benefits of genetic testing with a qualified genetic counselor and your medical provider. To speak with a Certified Genetic Counselor free of charge, contact Janet Talbert, MS, CGC at 800.423.8891, extension 1097. 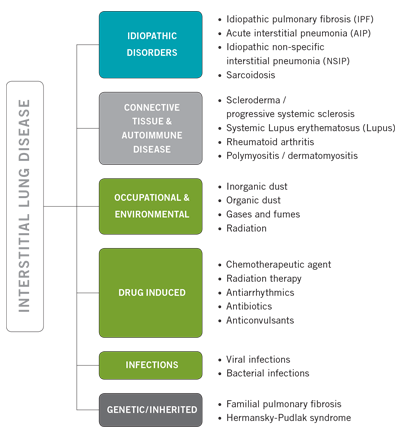 The most common symptoms of PF are cough and shortness of breath. Symptoms may be mild or even absent early in the disease process. As the lungs develop more scar tissue, symptoms worsen. Shortness of breath initially occurs with exercise, but as the disease progresses patients may become breathless while taking part in everyday activities, such as showering, getting dressed, speaking on the phone, or even eating.

Due to a lack of oxygen in the blood, some people with idiopathic pulmonary fibrosis may also have “clubbing” of the fingertips. Clubbing is a thickening of the flesh under the fingernails, causing the nails to curve downward. It is not specific to IPF and occurs in other diseases of the lungs, heart, and liver, and can also be present at birth.

Other common symptoms of pulmonary fibrosis include:

A “pulse oximeter” is a device placed on the fingertip or earlobe that indicates the amount of oxygen in the blood. Normally, nearly all of your red blood cells are full of oxygen. When all the red blood cells are carrying oxygen, the blood is called “100% saturated.” A normal saturation level is between 95% – 100% when the test is performed at sea level. Low oxygen saturation values can help your medical professional identify the presence of lung disease. Early on in PF, oxygen levels may be normal while you are resting, but can decrease while exerting yourself. This drop in oxygen saturation (called “de-saturation”) can make you feel breathless. When oxygen levels drop below 89% during exertion, your medical professional may recommend using supplemental oxygen while active.

Now I write, teach and coach mainly about 21stC 'interfaith as inter-spirituality' - and how we can grow closer to our True Self. . As anyone who knows anything about IPF will realize my energy is curtailed - so I am concentrating primarily on 'inter-spirituality'. . In the past I would have said that: . 1) I run courses and give talks at conferences and in universities and colleges in the UK, China, USA, Canada, Scandinavia etc. . 2) I provide materials, outlines and lessons for Schools. . 3) My range of interests include personal development, learning and teaching, photography and film, the arts generally, spirituality and educational practice and theory. . 4) At the same time I continue developing the human-centred studies SunWALK PDS (People Development System) - a whole-person, high-achievement model for individuals, and for use in, NGOs, schools and other organizations. . 5) The key question that continues to animate me and my work remains, "What is it to be fully and positively human?" . Contact me via onesummit AT gmail DOT com (replace At with@ etc.). . All good wishes Roger (Dr Roger Prentice) . For those interested; My first degree is in English and Education. My masters is in Adult and Community Education. My doctorate presented a new holistic meta-model of education called SunWALK. View all posts by Roger - Dr Roger Prentice